Benjamin Funke will be showing his video One at the 6th Edition of The Streaming Festival Dec. 1st -18th of 2011.  Based in The Hague, Netherlands, this festival includes both an online and offline component, with its physical "box" venue residing in Milan, Italy this year. 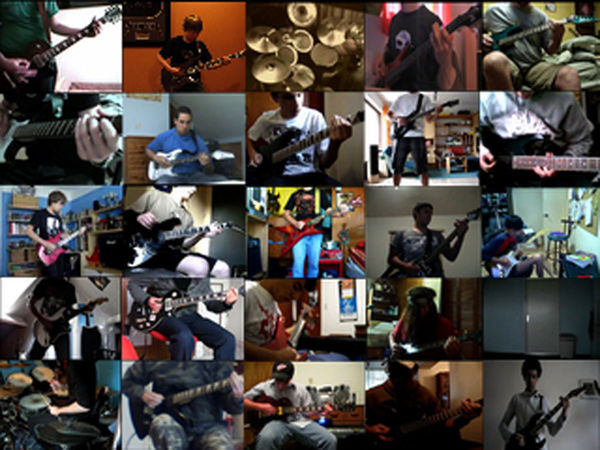 Piece description: My video One addresses Metallica’s legacy to the world of digital copyright. The video compiles one hundred perfectly synchronized YouTube® videos of boys and young men showing off their technical mastery of the metal instruments (guitar, drums and bass) as they cover Metallica’s magnum opus One. By taking Metallica’s music as my subject I instantly became suspect of copyright infringement — even though the audio that coincides with the video is not being played by the aging musicians in the celebrity metal band. Instead, the audio track showcases the combined efforts of one hundred passionately involved amateur musicians, each slightly out of tune and out of phase. Each one of these musicians is suspended in his bedroom or garage in an extended state of intense absorption during the 7:42 duration of the video. Each one is fully engaged, making the most of this chance to show off his technical chops for the world to see. Thanks to the alterations I have made to this appropriated Youtube footage, these private moments exist simultaneously in an artificial space. Coming together as a hundred-strong chorus, these isolated individuals become a strange, painfully sincere musical community that exists only in a technologically mediated parallel reality.