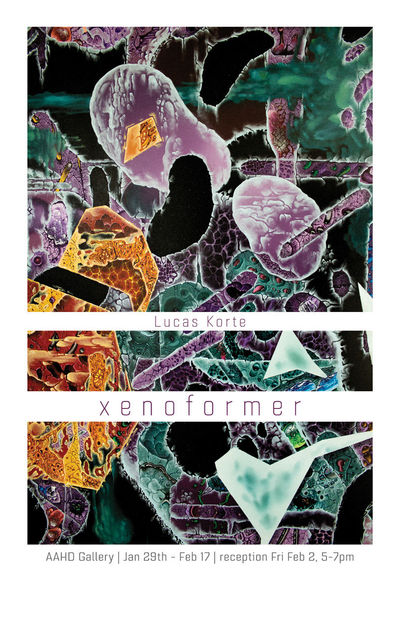 The Department of Art, Art History & Design is proud to announce Xenoformer - drawings and paintings by Lucas Korte MFA '16. The exhibition will run from January 29 to February 17. Please join us for the opening reception on February 2, Friday in the A|AH|D Gallery from 5 pm-7 pm.

[...] it amounted to a form of terraforming, as it would have been called in Twentieth century science fiction, but we might think of it more as “xenoforming.” There was even an infamous science fiction film of the 1980s that speculated capitalism was creating the appropriate environmental conditions for a species of alien that would come to dominate all life on earth, but even this got it a bit wrong. We weren’t creating the environment for aliens, we were creating the alien itself. We were making the planet itself into something else. That’s still a hard pill to swallow for many people: how a place could become a thing. Really unsettles a foundational understanding of reality we humans have. We’re used to seeing ourselves existing as discrete, bounded entities located subjectively within a larger world...then we find out we’re divisible, tentative, particulate actors on and part of a thing. In a lot of ways, the movement this development paradoxically dealt the biggest blow to was environmentalism. Because there was no more environment...we could no longer point to a ‘world that surrounds us’, could no longer point to a passive ‘background’. It’s just this massive alien thing that we now have to figure out how to live with.”

Non-living matter has long been characterized in Western thought as inert and passive; raw material to be activated and manipulated by human beings. Fossil fuels, metals, minerals, and countless chemical compounds populate a list of geologically-derived substances that we routinely treat as mere tools and substrates. Yet the passivity we take for granted is now in question: the multiplying anomalous emergences of climate mutation into the biosphere makes dimly palpable for humans a more uncanny world of dynamic, generative, and aggressively contagious materiality. Indeed, each day seems to bring to light a new horror: plastic rocks, gigantic sinkholes, massive pockets of methane gas, acidifying oceans, strange weather, resurrected pathogens.

One figure through which to think this troubling, dark vibrance at the heart of planetary geology is that of the toxic chemical- its disrespect for boundaries, its extreme reactivity, its existence as unintended bi-product or undetected intruder. At stake here is not only the critical question of how humans conceive of nonhuman agency, but whether we continue the kinds of thinking which condition our current, unsustainable participation on Earth. As a prolonged metaphysical imagining of new pictures of the inorganic and the geologic, particularly in its toxic, unruly forms, I investigate notions of matter as being fundamentally weird, revealing an inhuman planetary sphere that acts in accordance with its own mystifying agenda- resistant to full human conceptualization and instrumentalization. The critical question that continues to arise through my work is: how do humans relate to these larger, stranger material systems of which we are inextricably a part?