Event is free, and open to the public.  Tickets available in Riley 306 and at the Washington Hall box office prior to the show.

The videos in the show, entitled Water Wrackets and Intervals, began as reinterpretations of Peter Greenaway shorts from the late ‘60s.  Both works bring precision timing and an acid-etched color palette to the stylishly deadpan depiction of ebbs and flows. Intervals documents art gawkers at the Venice Biennale; in Water Wrackets, Indiana floodwaters saturate the screen to the drone of Crain’s psychedelic soundtrack.

Crain and Quinlivan composed, performed and produced the soundtrack for Water Wrackets, which came out in 2011 as an LP / DVD set on Kallistei Editions.  It features episodic arrangements of garage psychedelia that draw inspiration from Ravi Shankar, Sun Ra and 1970s Krautrock.  At Wash Hall Son et Lumière I, Crain and Quinlivan will be performing the Water Wrackets soundtrack as well as material from their brand new release on Kallistei Editions, Vibraquatic.

The artists would like to express their thanks to the Institute for Scholarship in the Liberal Arts, the Nanovic Institute for European Studies, the Center for Creative Computing, the University of Notre Dame Graduate School of Arts and Letters and Richard Gray for their support of these projects. 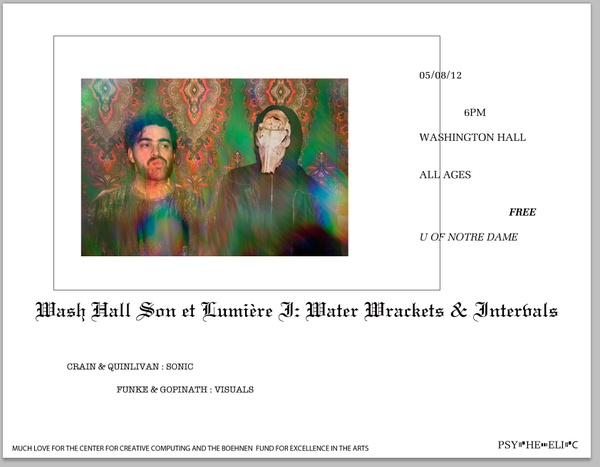