University of Notre Dame Painting Professor Jason Lahr's new show Too Dumb for New York City, Too Ugly for LA will be held at Packer Schopf Gallery in Chicago May 24 - July 6, with an opening reception on May 24th from 5-8pm. 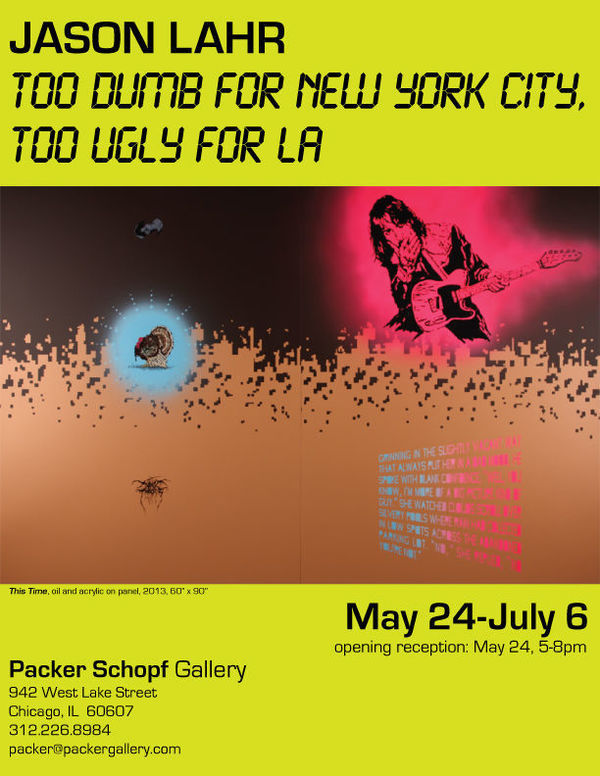 Lahr’s paintings combine darkly comic texts with appropriated images to create shifting narratives of working class male identity as shaped by popular culture. The images are pulled from a wide range of popular and sub-cultural ephemera while the texts that he writes are fragments that suggest their excision from a larger story and give the reader/viewer flashbulb glimpses at moments of narrative action. Centering on female characters that occupy positions of authority and male characters who are injured, inept, defeated, or perplexed by their dealings with women, the texts combine with the images to form narratives which question the expectations and assumptions we experience and create through popular culture.

Throughout Lahr’s work the visual language of digital culture is co-opted by the practice of painting as florescent grounds are interrupted by 8-bit digital fields or painted areas that appear to be low resolution .jpgs and images degrade to pixelated impressionism. In his paintings, the language of digital culture is combined with traditional painting techniques and references to illustration, print media, and graphic design to create an intertextual web which addresses the articulation of masculine identity as manifested in Generation X and which is filtered through feminism and identity politics/criticism.

This is Lahr’s second solo exhibition with Packer Schopf Gallery. His work was recently included in The Almost Metal Collective at Columbia College, Chicago, Gesturing Into Consciousness at Penn State University and will be featured in upcoming solo exhibitions at Elon University, Elon, NC and Safety Kleen Gallery One at Elgin Community College in Elgin, IL.