Installation artist Patrick Dougherty will be giving a lecture in the Annenberg Auditorium of the Snite Museum of Art on April 1 at 7:00pm. 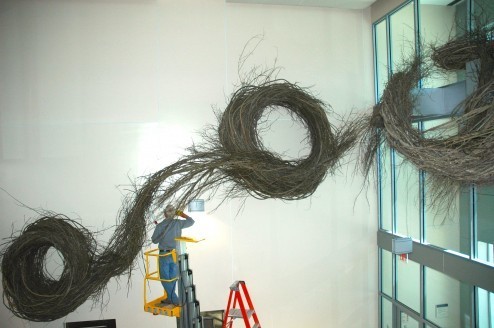 Fernwood Botanical Garden and Nature Preserve in Niles, Michigan has invited Stickworks’ sculptor Patrick Dougherty to Fernwood in April 2014 to produce one of his Stickwork pieces. Patrick Dougherty is a process-oriented artist whose whimsical, organic works are specifically designed for each site. Created with local and renewable saplings, his works embody natural life cycles, changing over time as the sticks settle and decay, eventually returning to the earth from which they grew. The resulting works evoke a wide array of natural forms, ranging from nests to objects with a transparent architecture, like woodland dwellings, or basketry.

In developing his artistic approach, Dougherty combined his carpentry skills with his love of nature to learn more about primitive techniques of building and to experiment with tree saplings as construction material. His work quickly evolved from single pieces on conventional pedestals to monumental scale environmental works, which required saplings by the truckloads. Over the last thirty years, he has built over 230 of these works, has become internationally acclaimed and has received numerous awards. For additional information, see www.stickwork.net.

What is particularly important about Dougherty’s artistic method is that he incorporates volunteer participation in to the creation process.  Thus, local individuals can contribute to the building of the sculpture.  Typical estimates are 50-100 volunteers, who may work for a few hours or for the full 14 days of the sculpture fabrication process.