The Photography Gallery at Riley Hall is proud to announce Invisible Landscapes - an exhibition of photographic collages by Sarah Hearn. The exhibition will run from January 14 until February 12, 2015. 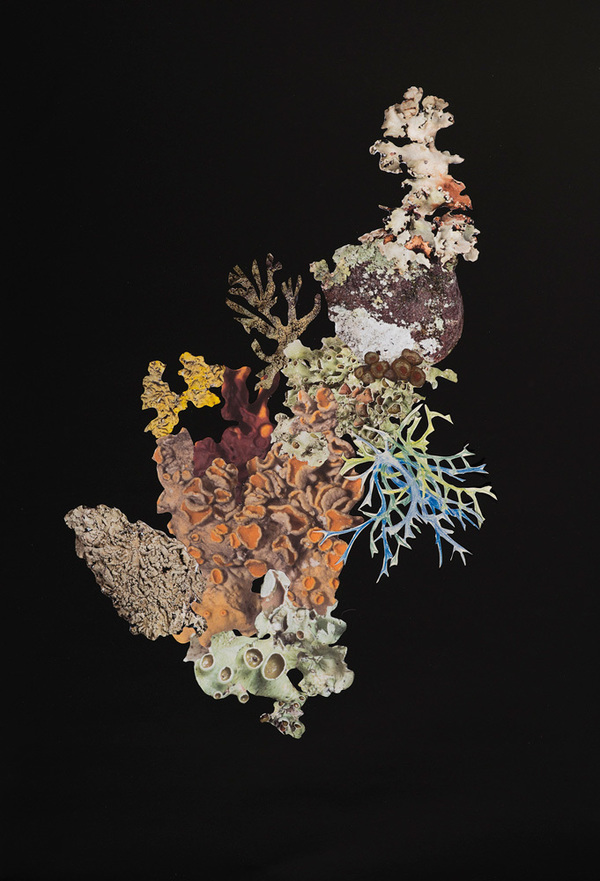 Invisible Landscapes calls attention to unnoticed terrestrial life forms while realizing new artificial ones. These works incorporate photographs and drawings of lichen specimens I have collected, identified, studied and donated to a herbarium. Each composition is unplanned and grows spontaneously. Lichen, serves as a form of visual white noise that once noticed in nature appears to be living everywhere. These unassuming marvels occupy an estimated 8% of our terrestrial world and are capable of growing on glass, brick, metal, rock, branches and the occasional animal. Lichen defy rules, behave symbiotically and can live to be over 1000 years old. NASA recently took lichen to space and it survived the trek. Lichens are some of the most implausible but real species on our planet- illustrating how science can be stranger than fiction.

Sarah Hearn is an interdisciplinary visual artist and researcher. Sarah has exhibited in galleries and art spaces across the United States and has contributed to international collaborations in Brooklyn, Berlin, and in Reading, UK for the 2014 International Science Week. Her fictional catalog of marine life An Unnatural History represented the United States at the World Creativity Biennial. Sarah’s multi-year collaboration with a PhD lichenologist is resulting in a published field guide for Lichens of Oklahoma. Sarah is a Co-Director of PLUG Projects, a curatorial collaborative of 6 artists committed to bringing new perspectives of art to Kansas City. She earned her BFA at the Santa Fe College of Art & Design and her MFA from Rochester Institute of Technology.