This spring's art history lecture will be given by Prof. Branden W. Joseph (Columbia University), one of the most prominent scholars of neo-avant-garde art and film in the U.S.  His presentation will be the first in a visual culture lecture series organized by Prof. Nicole Woods, titled Art/Vision/Agency. This event is made possible by the generous support of the Institute of Scholarship in the Liberal Arts and the Department of Art, Art History & Design. 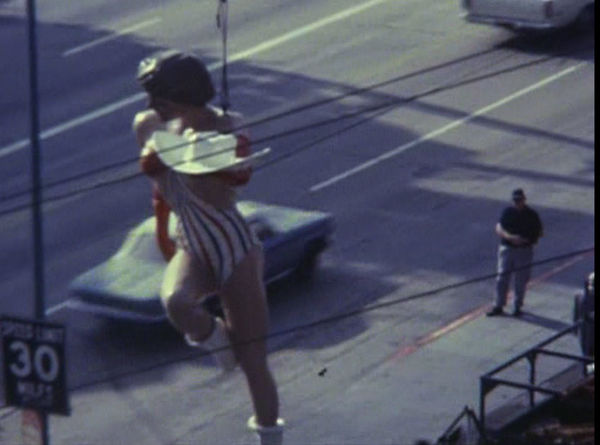 Public Lecture: “Object Worshipping: Notes on Claes Oldenburg’s Cinema, or the Ballad of the Turning Woman.”

In 1969, armed with a recently-purchased 8mm movie camera, celebrated pop artist Claes Oldenburg shot a series of short films, most notably the prosaically (and provisionally) entitled Statue of Turning Woman Being Installed in Front of Chateau Marmont, Los Angeles. Likely screened publicly only once (if at all) in the context of the artist’s 1969 Museum of Modern Art retrospective, Oldenburg’s thirteen-minute movie nonetheless represents a certain culmination to the little-known and little-investigated cinematic endeavors that he pursued throughout the decade. Drawing upon unpublished research from Oldenburg’s studio archives, Joseph’s lecture attempts to flesh out Oldenburg’s cinematic interests and pursuits—including collaborations and interactions with filmmakers such as Stan Brakhage, Jack Smith, Robert Breer, Ron Rice, John Jones, and George Manupelli—as they relate to his more well-known happenings, pop sculptures, and proposals for fantastic monuments. Only slightly better-known than Oldenburg’s interest in film is the variety of sexually suggestive writings, drawings, and collages he produced in the mid-sixties, works that relate integrally to the production and significance of Turning Woman. When placed back into its proper context, Oldenburg’s modest Turning Woman film emerges as a pivotal work within the development and transformation of his aesthetic at the turn of the decade.