Humboldt State University First Street Gallery presents, Chronic Fatigue, a two-person exhibition of sculpture and photographs by the artists and Notre Dame MFAs Walter Early and Benjamin Funke, running February 2 through March 6. Hailing from Lexington, Kentucky where he keeps his studio, Walter Early will be a visiting artist on the Humboldt State campus during late January and the first week of February. Benjamin Funke resides on the California North Coast and lectures at Humboldt State University. 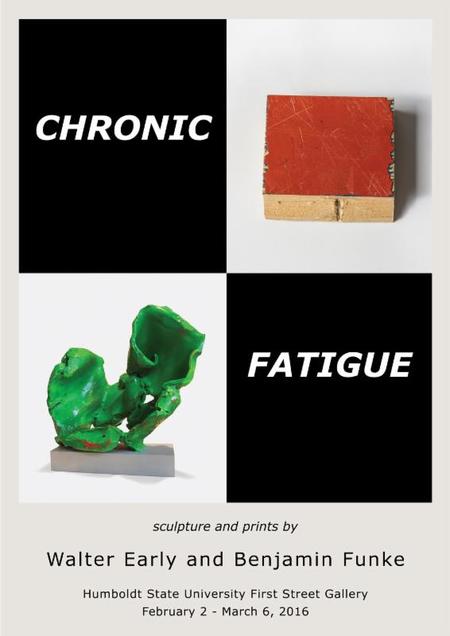 Chronic Fatigue is an exhibition that takes on the commonly held position that our culture is overloaded with information, sensation and endless waste. Moving from that premise, the two artists challenge the gallery visitor to experience art whose materials and subjects are drawn from the information overload and cast away resources. Using selected bits and pieces of cultural artifacts and repurposed materials extracted from the waste stream, Early and Funke create meditative, elegant pieces of art, which defy their mundane origins.

Walter Early's brightly colored steel sculptures originate as discarded scraps. Early sifts through the rubble of the places where he lives, discovering salvageable and reusable pieces, often repurposing discarded pieces of prefab office furniture as pedestals. Bright, monochrome pigments play with perceptions of mass, weight and volume-individualizing the pieces and distancing them from their scrap origins. Early pairs bright colors with dilapidated finishes, creating unexpected pairings of objects from urban and rural settings. He juxtaposes objects from our culture's highs and lows.

Early's work tests the justifications for preserving objects in domestic collections. Specifically he investigates the ability of objects of seemingly little significance to act as a memory aid and surrogate for the corporeal. Similar to still-life painting and photography, his found objects are often utilized or referenced as a metaphor for life cycles. Formally, the work draws from the language of fragments, using incomplete forms to allude to a larger whole. His manipulation of these recycled materials embodies the adage that one man's trash is another man's treasure.

Benjamin Funke's work in photography and sculpture investigates the collective experience shared by members of male-oriented subcultures organized around pursuits like hardcore music and professional sports. In his photographic series,TWA599, large, highly detailed color prints depict nameless objects, painted cloth fragments and tattered pieces of scrap wood. At a distance, the imagery is nearly abstract. Up close, in high resolution, the scarred, twisted and scorched surfaces indicate a devastating event of extreme force and violence.

These are relics salvaged from the crash of TWA flight 599, which killed Hall of Fame football coach Knute Rockne in 1931. The aviation disaster occurred as Rockne was en route to Hollywood to discuss the movie rights to his life story. In photographing these charred fragments, which have been preserved in the archives of the University of Notre Dame, Funke confers upon them the status of gridiron, sports-lore relics, worthy of the adoration of football fans across generations.

These scrap objects are among the tiny minority of broken pieces from our culture that are accorded reverence, while billions of others are destined for the landfill. Funke reinforces the reverence for the scrap relic with enameled, bronze sculptural pieces that echo the shape and feel of his photograph's shard subjects. The bronze pieces are installed in close proximity to the photographs and of course, the heroic, memorializing material of bronze elevates the significance of the material remains of Knute Rockne's final journey.

In one of his new works, narrow color fields are assembled from thousands of bookended sports trading cards. This presentation strips away the factual information that the cards were originally intended to communicate. Statistics, players' identities, card provenance and collectible value are rendered null as each card's signifying potential is restrained to a millimeter of color. Known quantities become ciphers; value becomes a matter of speculation rather than a predictable factor that is indexed to the outcome of crunched numbers. Funke pushes viewers to reevaluate what they see.

Benjamin Funke rounds out his contribution to the exhibition with his Swish series. These are sculptural, mixed media pieces that playfully capture the distorted shape of basketball nets right after the ball has passed through the net.

A reception for the artists will be held at HSU First Street Gallery on Saturday, February 6 from 6:00 p.m. to 9:00 p.m. during Eureka's monthly Arts Alive program. HSU First Street Gallery is open Tuesday through Sunday from 12 to 5 p.m. and is located at 422 First Street in Eureka, California.  Admission is free. Those planning group tours are encouraged to call ahead. For more information call 707-443-6363or visit the gallery's website here.