The Photography Gallery at Riley Hall is proud to announce Architecture of an Existential Threat - an exhibition of photographs by Adam Reynolds. The exhibition will run from February 19 until March 17, 2016. 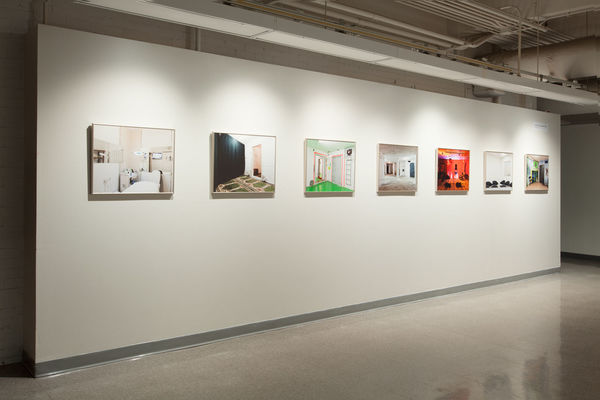 Architecture of an Existential Threat

Since its creation in 1948, the State of Israel has felt itself isolated and beset by enemies seeking its destruction. This collective siege mentality is best expressed in the ubiquity of the thousands of bomb shelters found throughout the country. By law all Israelis are required to have access to a bomb shelter and rooms that can be sealed off in case of an unconventional weapons attack. There are over 10,000 public and private bomb shelters found throughout Israel and the Occupied Territories.

The photographs in this series document these bomb shelters and offer a window into the collective mindset of the Israeli people. Israelis have normalized this “doomsday space” into their daily lives, often using the shelters as dance studios, community centers, pubs, and places of worship. For Jewish Israelis haunted by a history of exile and persecution, these shelters are the architecture of an existential threat – both real and perceived.

Adam Reynolds is a documentary photographer whose work focuses primarily on the Middle East. As a documentary photographer he seeks to elevate the subjects above the individual photographer and to allow the subjects to speak through the images. This allows him to navigate the delicate balance between the photographer’s own creativity and remaining honest to the subjects he documents. He began his career covering the region in 2007.  Adam holds a Masters of Fine Art degree in photography from Indiana University and undergraduate degrees in journalism and political science from Indiana University with a focus in photojournalism and Middle Eastern politics. He also holds a Masters degree in Islamic and Middle East Studies.   Recent exhibitions of Adam’s work include Tokyo International Photography Festival, Pictura Gallery, and Columbus Museum of Art & Design.  In 2014 he was the recipient of a Project Development Grant from CENTER Santa Fe.