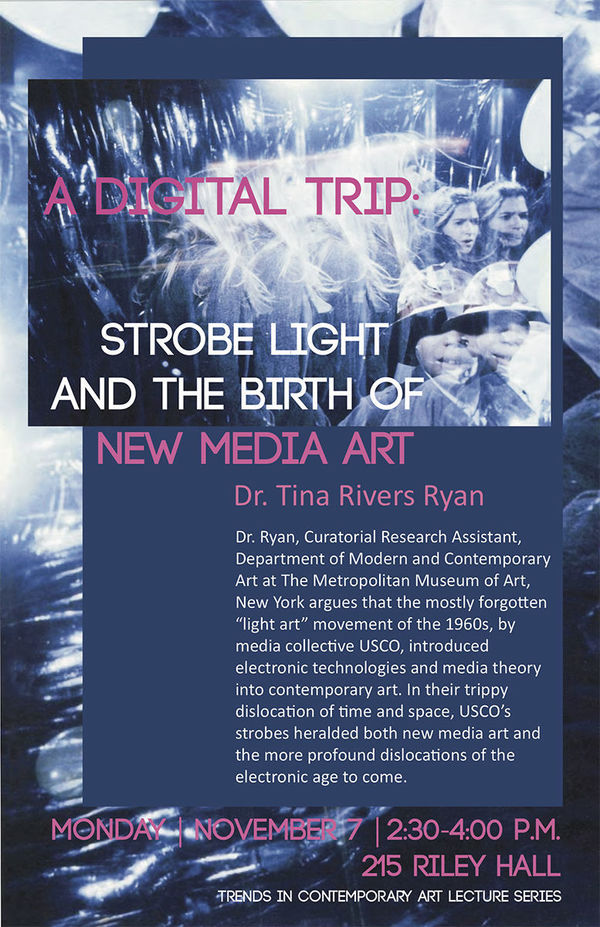 In the spring of 1966, New York filmmaker Jonas Mekas wrote in his regular column for *Village Voice* magazine about an emerging trend: suddenly, strobe lights—invented in the 1930s for scientific research at MIT—were being used in art happenings all over town. In his attempt to make sense of this phenomenon, Mekas interviewed the painter Steve Durkee, a member of the "intermedia" collective USCO, which used strobe lighting to create psychedelic environments in museums across the U.S. and Europe. To the question “What is the strobe light all about?,” Durkee replied, “Strobe is the digital trip.”

Using Durkee's comment as a launching pad, this talk argues that the mostly forgotten "light art" movement of the 1960s, represented here by USCO's works, introduced electronic technologies and media theory into contemporary art. While light is often presumed to function as a "universal" metaphor in art, USCO's strobe environments depended on the electronic modulation of fluorescent tubes, invoking the more complex electronic technologies that were then emerging—including the digital computer. In their trippy dislocation of time and space, USCO’s strobes heralded both new media art and the more profound dislocations of the electronic age to come.

Dr. Tina Rivers Ryan is an art historian and critic specializing in modern and contemporary art, with an emphasis on new media art and technologies. Her criticism has appeared in magazines such as Artforum, Art in America, and Even, and her scholarly work has been published in several edited anthologies and journals, including Art Journal and Framework: The Journal of Cinema and Media. Currently a researcher at The Metropolitan Museum of Art in New York, Dr. Ryan has also written for the Tate Modern and the Walker Art Center, and was formerly an instructor at Columbia University, the Pratt Institute, and MoMA. Her current book project, McLuhan's Bulbs: Light Art and the Dawn of New Media, examines the light art of the 1960s as a fulcrum between the discourses of “medium” and “media” in post-war art.