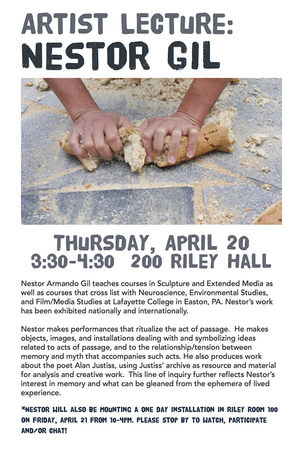 Nestor Armando Gil, Assistant Professor of Art of Lafayette College, will give a lecture on Thursday, April 20, 2017, at 3:30 pm in room 200, Riley Hall of Art.

Nestor Armando Gil teaches courses in Sculpture and Extended Media as well as courses that cross list with Neuroscience, Environmental Studies, and Film/Media Studies at Lafayette College in Easton, PA. Nestor's work has been exhibited nationally and internationally.

Whilte the media and material of his works vary widely and often, a common set of ideas thread them together. Questions of culture and place are at the center of his thinking, which expands from there to include inquiries about movement, memory, and loss. While the focus of his work tends toward the serious, it is his hope that the work also carries moments of humor, from the dry to the absurd.

He works to develop poetries of image, of function, and of interaction. Nestor's talk will share his recent projects while attempting to draw a line among them, one that looks at liminal spaces, at borders, at ritualized acts of passage, and at the vibrant and insecure conditions that attend them.