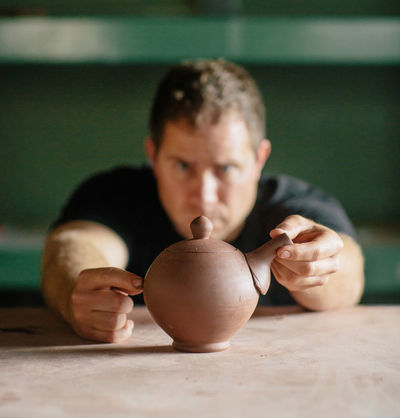 A public artist talk by Benjamin Carter will be held on Wednesday, October 11 at 1 PM in 120 Riley Hall of Art.

Ben Carter is a studio potter, workshop leader, and social media enthusiast based in Santa Cruz, CA. He received his BFA in ceramics/painting from Appalachian State University, and his MFA in ceramics from the University of Florida. His professional experience includes being an artist-in-residence at the Odyssey Center for Ceramic Art in Asheville, NC, as well as Anderson Ranch Arts Center in Snowmass, CO, the Archie Bray Foundation in Helena, MT, and the Ceramic Research Center Guldagergaard in Skelskor, Denmark.

From 2010-2012 he served as the Education Director of the Pottery Workshop in Shanghai, China. He has lectured and presented workshops at universities and craft centers in the United States, Canada, China, Australia, and New Zealand. He has exhibited internationally in numerous invitational and juried shows.  Carter was recently named the 2016 Ceramic Artist of the Year for Ceramics Monthly and Pottery Making Illustrated.