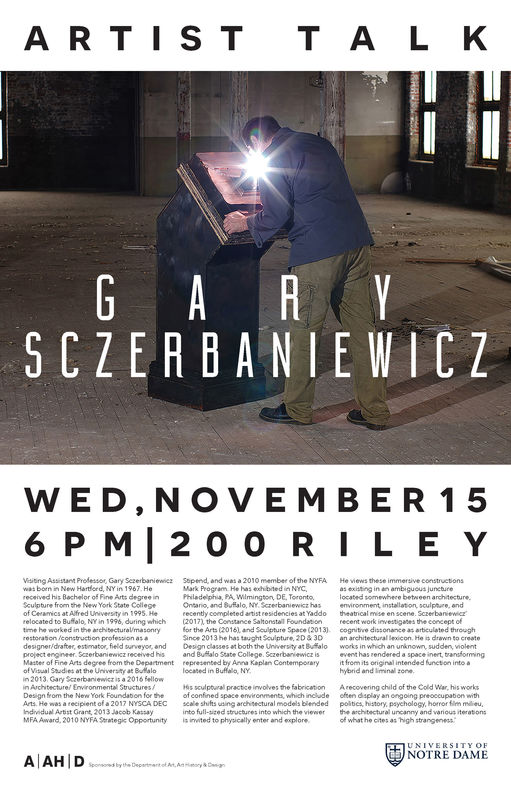 The Department of Art, Art History, & Design will have an artist talk by Visiting Assistant Professor, Gary Sczerbaniewicz on November 15, at 6 pm in 200 Riley Hall of Art.

Gary Sczerbaniewicz was born in New Hartford, NY in 1967. He received his Bachelor of Fine Arts degree in Sculpture from the New York State College of Ceramics at Alfred University in 1995. He relocated to Buffalo, NY in 1996, during which time he worked in the architectural/masonry restoration /construction profession as a designer/drafter, estimator, field surveyor, and project engineer. Sczerbaniewicz received his Master of Fine Arts degree from the Department of Visual Studies at the University at Buffalo in 2013. Gary Sczerbaniewicz is a 2016 fellow in Architecture/ Environmental Structures / Design from the New York Foundation for the Arts. He was a recipient of a 2017 NYSCA DEC Individual Artist Grant, 2013 Jacob Kassay MFA Award, 2010 NYFA Strategic Opportunity Stipend, and was a 2010 member of the NYFA Mark Program. He has exhibited in NYC, Philadelphia, PA, Wilmington, DE, Toronto, Ontario, and Buffalo, NY. Sczerbaniewicz has recently completed artist residencies at Yaddo (2017), the Constance Saltonstall Foundation for the Arts (2016), and Sculpture Space (2013). Since 2013 he has taught Sculpture, 2D & 3D Design classes at both the University at Buffalo and Buffalo State College. Sczerbaniewicz is represented by Anna Kaplan Contemporary located in Buffalo, NY.

His sculptural practice involves the fabrication of confined space environments, which include scale shifts using architectural models blended into full–sized structures into which the viewer is invited to physically enter and explore. He views these immersive constructions as existing in an ambiguous juncture located somewhere between architecture, environment, installation, sculpture, and theatrical mise en scene. Sczerbaniewicz’ recent work investigates the concept of cognitive dissonance as articulated through an architectural lexicon. He is drawn to create works in which an unknown, sudden, violent event has rendered a space inert, transforming it from its original intended function into a hybrid and liminal zone.

A recovering child of the Cold War, his works often display an ongoing preoccupation with politics, history, psychology, horror film milieu, the architectural uncanny and various iterations of what he cites as ‘high strangeness.'