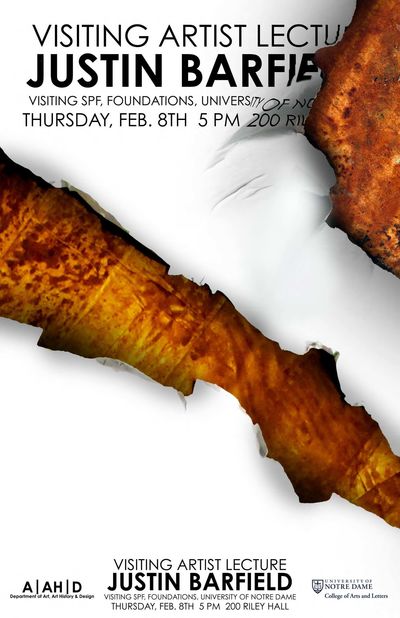 Visiting Assistant SPF, Justin Barfield will give a public lecture on Thursday, February 8 at 5:00 PM in room 200, Riley Hall.

Born in southern Louisiana, Justin Barfield received his Bachelor of Arts at Southeastern Louisiana University and his Master of Fine Arts at the University of Notre Dame. He has exhibited both nationally and internationally including the Urban Institute of Contemporary Art in Grand Rapids, Michigan, the South Bend Museum of Art in South Bend, Indiana, The Reece Museum in Johnson City, Tennessee, the 3rd Global Print 2017 in the Douro region of Portugal, and Indiana Wesleyan University, Marion, Indiana. Justin has lectured on his work at Southeastern Louisiana University, Indiana Wesleyan University, the Hannah House at the Mid American Print Conference, Delta State University, and presented at the 2017 FATE Conference in Kansas City, Missouri.

Justin is interested in our relationship with ‘place’ and addresses this relationship by highlighting physical changes brought about by both humans and nature. When the old is removed, renovated, or neglected an instance is created when progress and decay become intertwined leaving layers of memory. These physical changes become the narrative to how he views his surroundings, everything suspended in a complicated growth somewhere between being rebuilt and demolished. Justin articulate this narrative in his art by representing moments of tension embedded in somewhat insignificant decaying material and scenes addressing large environmental impacts.

Justin has a deep personal connection with these types of moments. As a native to Louisiana, Hurricane Katrina and the B.P oil spill in the Gulf of Mexico had major influences on how he views his surroundings. His home became a widely different place with memories connected to unrecognizable surroundings. He was also greatly impacted by visits to Louisiana’s Barrier Islands, a landscape aggressively changing and disappearing.

Although these dramatic events shaped him as an artist, he often finds his subject matter in decaying metal on vehicles, flaking paint from walls, and deteriorating objects. These everyday moments remind him of the cumulative effect change has over everything. He uses rust to represent this change. Rust is fragile and strong, beautiful and ugly. He hopes to catch this tension in his art and draw attention to everything’s temporal existence.