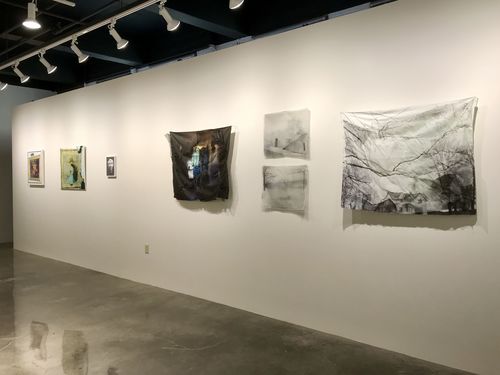 The A|AH|D Gallery at Riley Hall is proud to announce two photography exhibitions; Unmended by Sara Fahling and Altered States by Evan Hume. The exhibitions will run until September 25.

*Please note that the gallery has moved from O'Shaughnessy Hall to room 214, Riley Hall.

Unmended is an exploration of familial legacy in the aftermath of loss. The pieces in this series, photographs of my deceased grandparents’ farmhouse in the years before an after their passing, represent a home in transition through the stages of grief and acceptance. Unmended merges photographs, textiles, and hand embroidery to express a looming fear of memory loss. In an attempt to hold close the memories associated with this place, photographs are layered and mended together in an effort to repair what is easily forgotten.

Photographs are prompts for recollection; they are taken in anticipation of forgetting.
Unmended employs images that are printed on cotton and silk organza and mended with pensive stitching to elicit interplay between familial legacy and loss. The accumulated stitches obscure and repair parts of the photographs, serving as a metaphor for how memories can become altered and indistinct when revisited. The intimate and delicate stitching atop the structure of layered textiles and imagery provide a personal and visceral representation of my relationship with the imagery and memories encapsulated within each piece. The layering of textiles, photographs and thread makes the images less legible, confusing time and space, and illustrating the fragile and impressionable nature of memory.

In the infinite expanse of photographs
there are those that wander in a state of somnambulism, speaking in tongues and mutating as they move ever further away from their points of origin. In order to awaken these images from their babbling slumber they must be rendered as contemplative objects.

This body of work consists of photographs appropriated from the Federal Bureau of Investigation’s National Stolen Art File – an online database of artworks reported as stolen. Some information regarding artist, title, period, medium, and measurements is given for most of the artworks listed. However, the photographic documentation for many of the artworks exhibit varying degrees of obfuscation and legibility due to a combination of technical errors and digital compression. A distorted photograph in the National Stolen Art File is often the only publicly available visual documentation for an artwork listed in the database, existing in a strange space between cultural artifact and abstract data.

I have printed the digital images taken from the database at the approximate size of the original artworks, acting as pixilated placeholders that give form to the digital mediation, circulation, and consumption of art. In these altered states the images embody the contradictions of representation and abstraction, presence and absence.