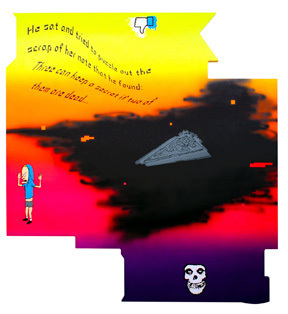 Associate Professor of Painting Jason Lahr's solo exhibition, MICROFICTIONS, at the newly opened A|AH|D Gallery at the University of Notre Dame is being held in conjunction with the &Now Festival of Innovative Writing. The exhibition features a selection of paintings on panel from the past five years as well as a brand new vinyl text installation. The show runs October 1-November 13, 2018. There will be a reception for the exhibition on Saturday, October 6, 10:00-12:00 Noon as part of the conference. The A|AH|D Gallery is located on the second floor of Riley Hall of Art.

The &Now Festival is being held at the University of Notre Dame October 5-7, 2018. &Now is a biennial literary festival known for presenting innovative writing, thinking about writing, and interdisciplinary explorations such as new poetics, performances, narrative, critical, electronic and multimedia projects. In addition to presenting new work, its book fair, panels and readings foster conversation about past, present, and future literary concerns and movements.

More information about the festival.

More information about the A|AH|D Gallery.