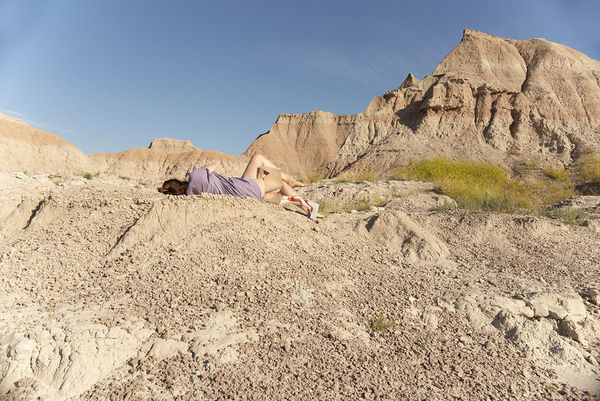 The Photography Gallery at Riley Hall is proud to announce Void of Course—an exhibition of photographs by Trisha Holt. The exhibition is open now and will run until November 18, 2019.
Trisha Holt's Void of Course brings together large-scale photographic collage and performance in the landscape. Holt often depicts her own body, but complicates the viewing plane through techniques of photographic doubling, fragmentation, self-quotation and self-erasing. The performances are set in the vast landscapes of the West - in US National Parks, side roads, alleyways, and open fields - aided by an off-grid, mobile digital printing lab. There is no delay between the idea and the making. The well-trodden sights captured have already been authored and visualized. The collaged imagesare found and borrowed for their ability to conjure the familiar codes of commodity and desire. At adistance, the images appear as straight-forward photographs, only to unfurl and dissipate upon closerinvestigation. The process of construction is not concealed, instead the pixelated, printed images arehastily fused together with cardboard and tape to be immediately used in the intervention. The poses, the armatures, the pixelation from enlarging the image beyond its means, are all elements to contradictthe genre and create a disturbance for the viewer. Void of Course is an experiment in deconstructing our relationship to beauty and the promises it offers.
Trisha Holt is a visual artist and photographer interested in the physical properties of the photographic print and the possibilities of its reproduction as a way to address the power of images in contemporary culture. Her images are printed and positioned as life-size, topographical, and site-specific installations which are then re-framed in new photographs or experienced as sculptural objects. Images are appropriated and altered, with echoes of YouTube videos or cult classic movies. Memory is displaced or contested, and what the lens sees is actually happening - though it appears uncanny. Holt has shown her work nationally in New York, Detroit, Seattle, and Arkansas among others. In 2012, she received her Masters of Fine Art, Photography at Cranbrook Academy of Art. Her work is representedby the David Klein Gallery in Detroit, MI. She is an Assistant Professor and Gallery Director at Siena Heights University in Adrian, MI.