The 14th annual Alumni Design Conference was another great success, with ten members of the class of 2002 returning to discuss their creative careers over the last decade, review the work of current students, and offer an assessment of the graphic and industrial design programs. Tim Irvine ’89, VP and Group Creative Director of Acquity Group, served as keynote speaker, addressing a room of more than 80 attendees. 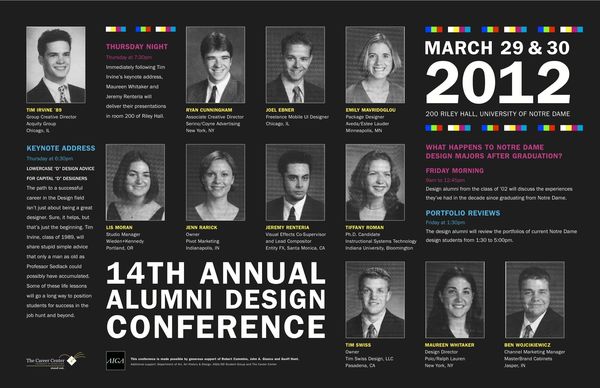 Participants and presentations were as follows:

The path to a successful career in the Design field isn’t just about being a great  designer. Sure, it helps, but that’s just the beginning. Tim Irvine, class of 1989, will share “stupid simple” advice and life lessons that will go a long way to position students for success in the job hunt and beyond.

Maureen Whitaker ’02 is Design Director of Polo Golf and Tennis, Ralph Lauren Golf and Tennis, and men’s and women’s RLX Golf and Tennis at Ralph Lauren. While at Notre Dame, Maureen was in the BA graphic design program and also played varsity lacrosse for four years. After graduation, she spent two years as a graphic designer in Chicago. Maureen moved to New York City in 2004 to enroll at the Fashion Institute of Technology and received her MA in Fashion and Textile Studies in 2006. Upon graduation she started working at Ralph Lauren in the men’s golf and tennis design department and has continued to grow within the company over the past six years, taking on more responsibility, most recently with the women’s golf and tennis brands. Maureen enjoys working with and styling the PGA tour players who Ralph Lauren sponsors, including #1 ranked golfer in the world Luke Donald, and golf legends Tom Watson and Davis Love. Her work travels have brought her to Tokyo to design a golf bag and to London and Paris for inspirational shopping trips. Maureen's favorite trip is her annual pilgrimage to the Master’s tournament in Augusta, GA. She has happily traded in her lacrosse sticks for golf clubs and racquets, and in her free time she enjoys wear-testing the product playing golf, tennis, paddle, and squash.

Jeremy Renteria  ’02 is Visual Effects Co-Supervisor and Lead Compositor at Entity FX, in Santa Monica, CA. Jeremy spent two-and-a-half years as a graphic designer in his hometown of El Paso, Texas before moving to Los Angeles to pursue a career in visual effects. Since 2005, he has held several positions at Entity FX, and is now in his second year as Visual Effects Co-Supervisor on the studio’s primary project, The Vampire Diaries. As VFX Co-Supervisor, he is responsible for prioritizing, monitoring and reviewing effects; as well as training and managing a team of artists. In addition to supervising, his responsibilities as Lead Compositor include color correction, incorporating CG elements into live-action footage, and creating invisible effects. Besides his on-going work on The Vampire Diaries, Jeremy has also contributed effects to a wide variety of projects including Night At The Museum 2, Law Abiding Citizen, Conviction, Michael Jackson’s This Is It, The Spirit, Into The Wild, Breaking Bad, No Ordinary Family, Smallville and Terminator: The Sarah Connor Chronicles.

Ryan Cunningham ’02 is an associate creative director at the leading Broadway advertising agency SERINO/COYNE and is a Drama Desk nominated lyricist and bookwriter. He holds a masters degree from the NYU Musical Theatre Writing Program, and his thesis “I Love You Because” was produced off-Broadway and has since seen over fifty productions both nationally and internationally in five languages. He's just recorded his second musical “Next Thing You Know” on Yellow Sound Label for release this spring. At SERNIO/COYNE, he works as an associate creative director on the hit Broadway shows Jersey Boys, Wicked, The Book Of Mormon, and How to Succeed In Business without Really Trying.

Joel Ebner ’02 is a freelance designer who specializes in mobile interfaces and smartphone apps. For 6 of the last 10 years following his time at Notre Dame, he has worked as an independent contractor for some of Chicago's top agencies including Razorfish, GravityTank, and Y&R, where he has collaborated on projects for AT&T, Walgreens, Qualcomm, Sears, and Kenmore. Currently, he is freelancing for Allstate, where he is leading the design on a number of apps for iPhone and Android. Outside of his work life, Joel is a musician, singer, and songwriter for the band City States, who just released its debut EP, Resolution.

Emily (Hallinan) Mavridoglou ’02 is a Package Designer with the in-house Creative Team at Aveda/Estee Lauder in Minneapolis, Minnesota. Aveda leads the Global Beauty Industry in developing products and packaging that are environmentally sustainable. Every design decision Emily makes is based on Aveda’s mission “to care for the world we live in” by minimizing packaging and maximizing use of recyclable and post-consumer recycled materials. Before moving to Minneapolis, Emily worked at several design agencies in Cincinnati designing for local and national brands, including P&G, DIAL, Colgate-Palmolive, United Dairy Farmers, and 3M. Emily’s design education and B.A. in Marketing from Notre Dame has proven to be valuable, influencing design from store aisles to the fashion runways.

Lis (Parker) Moran ’02 is a Studio Manager at Wieden+Kennedy , an independent, privately held international advertising agency with offices in Amsterdam, Delhi, London, New York City, Portland, São Paulo, Shanghai, and Tokyo. A full-service, creatively led communications company, Wieden+Kennedy has helped build some of the strongest global brands, including Coca-Cola, Chrysler, Delta Air Lines, Electronic Arts, ESPN, Heineken, Honda, Kraft, Levi’s, Nike, Powerade, and Procter & Gamble. At Wieden+Kennedy, Lis leads a four-person design team in creating the global advertising campaigns for Levi Strauss and Company. She handles each project from a design and production perspective; initially managing the client presentations, and ultimately, once concepts are approved, she oversees the design, typography, retouching, and final production of the print and out-of-home materials. Prior to pitching Levi’s in the fall of 2008, Lis worked on the Starbucks account. Lis began working as a studio artist at Wieden+Kennedy in the summer of 2005 when she and her (now) husband, Mike, moved to Portland from the Bay Area. Prior to that she worked at TBWA\Chiat\Day San Francisco for 2.5 years where she began her advertising career working on adidas. Outside of work, Lis happily lives in a 1923 bungalow with her husband, Mike, 5-month old son, Charlie and two dogs, Tanq & Arthur.

Tiffany Roman ’02, M.Ed. ’04 is a fifth-year Ph.D. student in Instructional Systems Technology at Indiana University. Her research interests include technology integration and design education in pre-service teacher preparation programs and K-12 environments. In addition to publications and presentations at the national level, Tiffany has served as a research assistant on large-scale funded projects, including those supported by the U.S. Department of Education. As an associate instructor and adjunct faculty, Tiffany has taught a variety of undergraduate education courses, including Programming for Microcomputers in Education, Computers in Education, and Integration Technology into Teaching at IU and IUPUC. She is currently designing her dream course, Microcomputer Graphics for Teachers, which she will pilot during the summer of 2012. Prior to entering academia, Tiffany earned her Master’s degree in Education through Notre Dame’s ACE program where she taught inner city fifth-graders in Dallas, Texas for two years. She stayed in the Big D an additional three years, working as a high school art and design teacher and developing an award-winning secondary graphic design program along the way. Determined to settle in Texas forever, her plans were thwarted when ND Industrial Design alum, Ben Wojcikiewicz (BA ’02), proposed. Now residing in Bedford, IN, Tiffany and Ben spend their free time raising Rory, their delightful 10 month-old baby boy, and remodeling their mid-century ranch.

Ben Wojcikiewicz  ’02, AKBD, is a Channel Marketing Manager at MasterBrand Cabinets. From the heart of Indiana’s Cabinet and Furniture manufacturing South, Ben has Channel Marketing responsibility for Canadian Home Centers including The Home Depot, Lowe’s and RONA, having begun his journey with MasterBrand as a member of the team that supports The Home Depot in the US. The leader of teams that rolled out Thomasville and Martha Stewart Living Cabinetry in Canada, his seemingly ever-evolving role is mostly about creative problem solving, go-to-market strategy creation and management of the product portfolio to win in the Canadian Home Center Channel. Originally from St. Joseph, MI, Ben received his BA in Industrial Design from Notre Dame in 2002 and worked as a Graphic Designer at Whirlpool Corporation before his first Marketing position there in Architecture + Design Marketing in 2005. In 2007 he married Tiffany Roman (BFA ’02) and moved to Indianapolis where he was the Market Development Manager for FESTOOL. He currently resides in Bedford, IN with Tiffany and their son Rory—using much of his accumulated design knowledge for home renovation on their mid-century modern limestone ranch house.