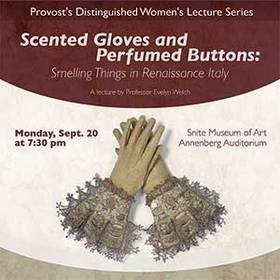 Evelyn Welch, professor of Renaissance Studies in the School of English and Drama at Queen Mary, University of London, visited the Notre Dame campus on September 20th, 2010. Prof. Welch presented a public lecture entitled Perfumed Gloves and Scented Buttons: Smelling Things in Renaissance Italy.  Her lecture addressed the sudden and drastic increase in the production of perfumed objects in Italy between the 1560s and 1580s.  Welch explained how scented objects were paradoxically necessary luxuries.  They were necessary to combat the constant stench of the period and to protect wearers from harmful, disease-causing smells.  However, they were also considered a luxury because of their association with amorality and vanity, particularly if they were used as a means of seduction or even murder.  Nonetheless, the influx of scented goods during this time illustrates a concern more with protection than with reputation.

The protective quality of smells came from medieval medical concepts of the 14th century.  The belief existed that the brain, as the true organ of smell, could be polluted by harmful scents.  Scented objects were hung on the person or carried to act as a shield from disease-causing smells.  Clothing, and accessories such as gloves, were washed in scented water and covered in filigreed buttons filled with perfume.  Thus, there was a demand for constant replenishment of scents which led to a burgeoning perfuming industry and a proliferation of do-it-yourself books dedicated to the art of making scents.

Mrs. Welch conducted a graduate seminar the following day entitled Learning from Things: Material Culture and the Italian Renaissance.  By presenting her research on costume, Welch demonstrated the kinds of information that can be gained through the study of material culture.  By asking why certain types of garments and accessories were popular, we can learn about status, reputation, and the mentality of wealth and image in Renaissance Italy.  Although her work is focused predominantly within the Renaissance, the larger questions Welch posed are relevant to the study of any era.