When the city of South Bend needed ideas for a new community technology center, it turned to Ann-Marie Conrado’s design research practices class at the University of Notre Dame for help.

Part of the collaborative innovation minor in the Department of Art, Art History and Design, the class brings together students from multiple disciplines, from design and engineering to business and anthropology, to solve complex design problems.

In this case, the city wanted to create what it called an “inclusive technology resource center” to help residents on the wrong side of the digital divide take advantage of technology for personal and professional growth.

“We’ve been thinking for a while about what type of investment we can make and how we can position ourselves to become a thriving city in the 21st-century economy,” said Santiago Garces, the city’s chief innovation officer. “We want to be able to enhance the capabilities of the community and make South Bend a tech hub, but we have to think about how to do that in an inclusive way.”

The design thinking process seeks to identify innovative solutions to design problems through rigorous research, beginning with discovery or inspiration, then ideation and implementation. 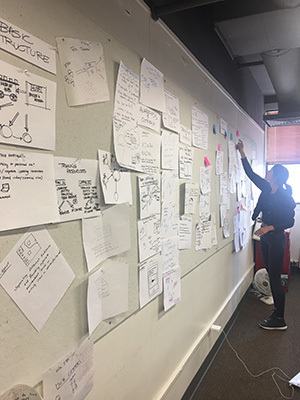 To that end, the students spent the fall semester scoping the problem and then interviewing residents, community leaders and business owners — more than six dozen in total — to better understand the issues, needs, gaps and areas for opportunity and intervention around it.

They then incorporated that information into a proposal for a decentralized resource center, dubbed “South Bend Spark,” composed of a primary center for volunteer and educator training, partner-run satellite centers for residents and an RV-based mobile center for community outreach and on-site job training.

They presented their work to the South Bend Department of Innovation and Technology, led by Garces, a Notre Dame alumnus and a graduate of the University’s ESTEEM graduate program, in December.

“We use design research on ‘wicked’ problems in which parameters or constraints or stakeholders are shifting and we’re not sure where one problem ends and another starts,” said Conrado, assistant professor of industrial design at Notre Dame.

“So what we do in the research process is we use ethnography, where you do deep immersion in the field of whatever you’re studying,” Conrado said. “You don’t just do focus groups in sterile places; you go out into the field and study people.”

In addition to questioning, the students used observation and other techniques to better understand residents’ relationship to technology, helping the students to “see past assumptions” and “inspire new and different ways of looking” at the problem, Conrado said.

Jacob Rush, a sophomore industrial design major from California, was part of the team that conducted the interviews.

“We did in-home interviews and used other ethnographic research methods to try to understand people and how they interact with technology in South Bend,” Rush said. “We tried to understand what their aspirations for technology were, whether they were aware of the technological resources in the community and just their general perceptions of technology.”

The team was surprised, Rush said, by the prevalence of smartphones in the community, even among poor and homeless populations.

“We found people at (women’s shelters), the library, very vulnerable populations, who relied on their cell phones more than we did,” Rush said. “It was a lifeline that tethered them” to friends, family and community resources.

A homeless woman described using her smartphone to navigate the city at night, Rush said. Others told of using them to apply for assistance or search for information about local food kitchens, including locations and hours of operation.

Yet, Rush said, when the students would ask these same people about their comfort and experience with technology, “They would say, ‘I don’t know anything about technology.’”

“So what we began to find was that there really was no digital divide, but rather a phone-computer divide,” he said.

Another takeaway, Rush said, was that those least comfortable with technology were also least likely to use a traditional technology center comprising a giant lab with computers.

“You can’t just open a room and throw computers into it,” he said. “There are much more efficient ways that we can help the community.” 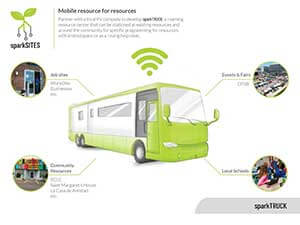 That led to the idea of satellite centers, dubbed “sparkSITES,” that would take advantage of existing resources like schools or community centers to weave technology and expertise into the community itself.

A lot of groups out there have already done the hard work of building community,” Conrado said. “So instead of trying to make a brand-new community, we should be helping those groups that are already out there” pursuing a social mission to improve their outreach around technology and eliminate that as a potential barrier to success

Along with two to three other students, Rush also worked on the curriculum and programming for the center, using the anecdotal evidence about smartphone use to model a program that would help residents transfer those skills to the desktop, a more efficient device.

From there, Rush said, the team focused on three program areas: communication, including email, social media and messaging; information gathering, including how to safely navigate the web and identify reliable sources of information; and applications, including how to create user names and passwords and download, access and save documents.

He described the approach as task oriented, focused on helping people use technology to simplify their daily lives.

Other teams focused on the structure of the center, including the buildings, other physical objects and the sparkSITES, and on brand identity, including the vision, values, personality and logo — a green seedling sprouting from three computer circuits.

Samuel Cho, a fifth-year student in the John J. Reilly Arts and Letters/Engineering Dual-Degree Program, spent the early parts of the semester mapping potential target areas for the technology center and the latter parts identifying existing resources and contributing to the brand design, including the logo and color scheme.

A native of Brea, California, Cho said the experience taught him that “empathy is the key to design research and allows those involved in the process to dig deeper and find solutions beyond just ‘low-hanging fruit.’”

“This course and all of the fieldwork we had to conduct was extremely helpful in not just introducing me to the real-world application of research on a city government project, but in providing me the resources to conduct any and all future research endeavors in a more sophisticated and nuanced manner,” Cho said.

The final product, in the form of a seven-part PowerPoint presentation with supporting data, encompassed a vision for the center based on thousands of hours of research and design work over the course of an entire semester.

“It was awesome,” Conrado said. “The students did a fantastic job.”

“For us, the research is invaluable,” said Garces, the city’s chief innovation officer.

Garces said the city would consult the students’ work as it moved forward with the project, working with a budget of $3 million in redevelopment money from local business property taxes.

“We’re in the process of digesting the information,” Garces said, adding, “We hope to present (a final proposal for the center) in the very near future.”

The city first conceived of the technology center as part of an effort with the Notre Dame Wireless Institute — dubbed “SBXG” — to develop a test bed here for future generations of wireless technology — 5G and beyond.

And while an application for funding for the project through the National Science Foundation has yet to be accepted, the city remains committed to the center simply as a community resource, Garces said.

“We think it will be a pretty powerful asset for us for economic development and education for the community,” he said of the proposed center.

This is just the latest example of the city collaborating with Conrado’s students on a design problem.

Just this past December, the city launched a #MySouthBend Instagram campaign based on the work of one of Conrado’s previous classes, which looked at the city’s strategy for digital outreach, including its website and social media accounts.

Together, these efforts illustrate the benefits of collaboration between the city and University around issues of great impact and importance to the community as well as the power of design thinking to reimagine problem solving as a human-centered enterprise.

“They’ve been quite candid in saying, ‘We depend on this work. We trust what you do,’” Conrado said of the city and its view of the students’ efforts. “And I think that’s born of the results.”

“The students are not working on hypothetical projects; they’re working on projects that have a really high impact in the community,” Garces said. “And that’s reflected in the quality of the work.”

Originally published by Erin Blasko at news.nd.edu on March 21, 2018.