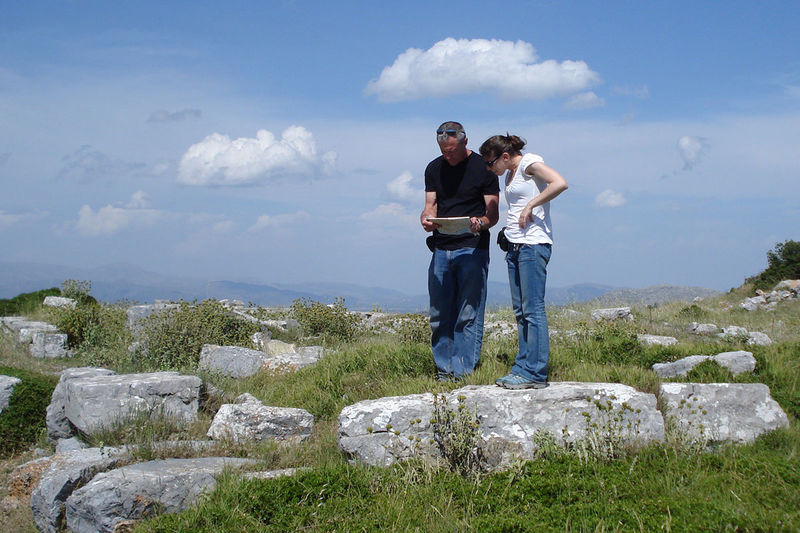 Alexis Belis ’00 arrived at Notre Dame with a plan. Following in her father’s footsteps, she was ready to major in physics, tackle the requirements for medical school, and become a doctor.

Today, she curates ancient art at the Getty Museum in Los Angeles.

Eager to get started on her physics and pre-med courses her first semester, Belis unsuccessfully tried to opt out of the University’s fine arts course requirement. She nearly missed her true calling.

“That first fine arts survey course changed everything,” Belis said. “It turned out I wasn’t nearly as excited about or interested in my physics courses.”

“I love architecture because I like puzzles and how they fit together,” she said. “Robin’s class was very much looking at how buildings fit together.” By the end of her second semester at Notre Dame, Belis had shifted her focus to art history and archeology and picked up a second major in music performance. A talented harpist, she continued her study of the instrument throughout her college years.

It was art, though, that consumed her.

“After that first class, I took a course with Professor Rhodes every semester he was there,” she said. “He became a trusted mentor and recognized something in me that I didn’t even recognize myself.”

Belis began studying Greek and Latin at Rhodes’ suggestion, since most ancient art graduate programs have a language requirement. She later added French and German to her repertoire as well.

“Robin helped me think in terms of the bigger picture,” she said. “I had no idea when I started that what I was doing would lead me here.”

As she deepened her study of ancient art, Belis was excited about the hands-on opportunities that came along with her focus.

“It’s more than just studying art in a classroom — studying ancient material gives you the opportunity to get out in the field and get your hands dirty,” she said.

After graduation, Belis spent a year at the University of Pennsylvania immersing herself in ancient Greek and Latin before heading to Corinth, Greece, to participate in her first dig — with Rhodes.

From there, she was hooked. What followed was a 14-year journey that took her back and forth between the U.S. and sites in Greece and Cyprus, including many return trips to Corinth to work alongside Rhodes.

Along the way, she studied at the American School of Classical Studies in Athens, Greece, and completed a master’s degree in art and archaeology and a Ph.D. in classical archaeology at Princeton University.

A mountaintop sanctuary in Greece she was visiting for a dig became her passion project that turned into her doctoral thesis.

“It was incredible and beautiful, and I realized I could do my dissertation on this,” she said. “It was never anything I was tired of thinking about.”

“It was an important realization that at Notre Dame I could take classes I was interested in, and that could actually lead to a career path. People come in thinking they know exactly what they want to do. It turns out I didn’t, and I am so happy I ended up following this fascinating and unexpected path instead.”

Today, Belis has translated her extensive field experience into a position as assistant curator in the Department of Antiquities at the Getty Villa, part of the J. Paul Getty Museum in Los Angeles.

After so many years of fieldwork — where she spent weeks sifting through dirt with a hand trowel and rarely had the chance to wash her dig clothes — Belis is thrilled she can still get her hands on ancient objects.

“I wanted to physically work with objects and not just be doing research,” she said. “That’s something I love about my job. I can go down to the storerooms and look at anything I’m interested in. Having direct access to so much material is incredible.”

Every day, Belis is grateful for the opportunity to wander among relics of the past and do what she loves.

And it all started with a requirement she couldn’t avoid.

“It was an important realization that at Notre Dame I could take classes I was interested in, and that could actually lead to a career path,” she said. “People come in thinking they know exactly what they want to do. It turns out I didn’t, and I am so happy I ended up following this fascinating and unexpected path instead.”

Originally published by Eileen Lynch at al.nd.edu on September 11, 2017.