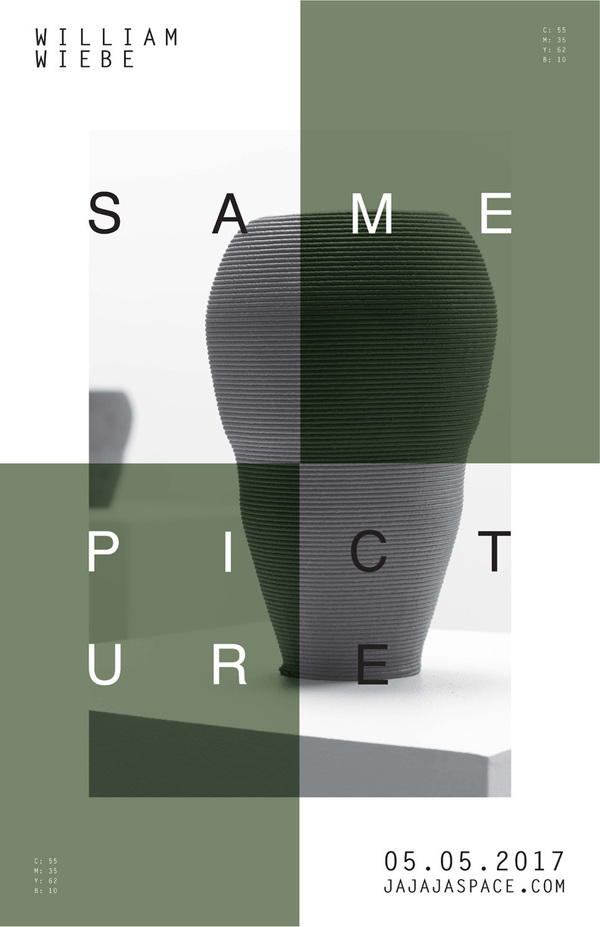 Jajaja Space will hold a closing reception for William Wiebe's exhibition Same Picture this Friday, 5/5 from 7-9pm. Please stop by and check out the work.
Jajaja Space is located at 225 N. Lafayette Blvd. in South Bend, IN (downstairs from Liberty & 33rd Furniture Co.).
Jajaja is an exhibition, research and studio space in South Bend, IN founded by Timothy Neill and Zachary Norman.

The artifact was rediscovered on a sound stage, the prop was left in the earth. We imagined body doubles of the dictator, the president’s lipstick smeared on the yellow cake. Your mother shaved the finger of the statue with a rasp, your father found the coils in his sock drawer. The destruction was performed before the cameras, the unveiling occurred in the dark of the spider hole. Red Dawn was a movie before it was a military operation. The professor was an archaeologist before he was an action hero, flesh before he was plastic.
If the explosion rips through your earbuds, you can adjust the volume from the cord. If the incendiary device shines blue in the night, tap your screen and it turns orange, put on your goggles and you will see it green as the tracer rounds. In the language of the tablet, the wedge recalls the chaff recalls the harvest, cuneiform and rare earths account for the edge of empire. The surge exceeds the calibration of the monitor, the zoom of the pirated copy exceeds the captions, the screen becomes visible through its pixelation. We turn back from the text to the pictogram, the QR codes that mark the wedge of the barrel, the better to track the inventory. The line of script did not always draw from left to right.
As the mechanical arm dispenses earth forms, it reveals the excavatory possibilities of hydraulic motion. The caves empty of bodies and from the walls of the mountain emerge gods. Is it different when stone succumbs to dynamite or chisel or water, would the statues have been taken if they were smaller, would the towers have fit into the hillside? If you rewind the footage, do you see the cameraman? We pack our bags and obliterate the temporary city. The destruction of the image creates a new one.
The standardization of products is a function of Fordism, the rippling of explosions marks the dynamism of the economy. Stop-loss ensures the efficiency of the workforce, new entanglements ensure new productivity. We offload the cargo of the old war, the troops march back and forth along the gangway, the exercise is a game, recorded for the web, we watch the death we no longer anticipate, the net breaks and the arms, of varied provenance and caliber, spill onto the desktop where the architect toils.
In the renderings of the building are its ruins, elevations that occur in time and space. When considering concrete, one must be careful to select varieties that mottle correctly under the abrasions of the sledgehammer. Like the pumpjacks that rise in the fields, shadows imagined by the satellite, the war is always cheaper to abandon than to dismantle, the fullness of the ruin is its approximation of that which does not exist. Our preparators walked off the base when the pipeline of memory ruptured, the reconstruction was forgotten.
This is an object removal notice, the presence of an absence, to remind you that the plinth is but a temporary state, the sandbags stand-ins, that the invasion is defended if not defensive, that a value is being evaluated, that the people who emerge from the rubble will clamor once more for democracy.
Bio:

William Wiebe is a Chicago-based artist working between photography, sculpture, text, and installation. His work explores the absences that haunt the mediated image. He is an MFA candidate in the Photography Department at the School of the Art Institute of Chicago and is the current recipient of an Arts, Science, & Culture Graduate Collaboration Grant from the University of Chicago.