Third Year MFA Candidate in Painting Lucas Korte recently had his book Der Trepanomikönen published with Are Not Books.

Released in November, this elaborately illustrated artist’s book is a funny, sarcastic inquiry into something like the idea of “democratic bio­ materialism:” bodies implicated in networks of language, politics, consumption (eating), and exchange. Der Trepanomikönen is “the guidebook for tomorrow’s ultratellurian bureau­ hegemony and all of its associated eating noises.”
- ­ From the publisher, Are Not Books 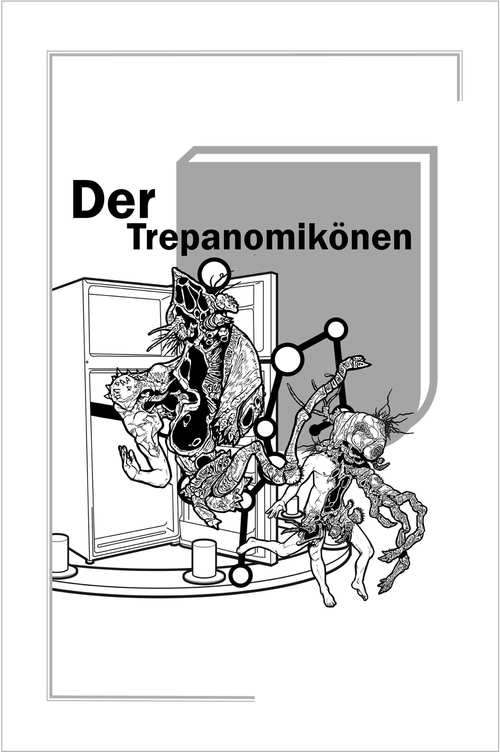 This book grew out of a larger internet­based project that was ongoing for almost four years. In the first instance Der Trepanomikönen is an attempt to imagine a culture­mining project undertaken from the perspective of a set of nonhumans. Perhaps to them, human culture might not be an entirely visible phenomenon, but rather a kind of occult choreography shuffling matter around in baffling arrays. From such a view, in order to delineate the phenomenon, certain intrusions might be necessary. Der Trepanomikönen is, in this sense, a kind of cultural particle collider.

In the second instance, it attempts to imagine the human as simply one variety of nonhuman. Here, the human body and other bodies are all implicated within ecologies discursive, material, social, and affective. Bodies and language are seen as having both signifying aspects as well as a non­signifying alternate materiality. In both cases, the original impetus for the project was the way in which social media, the internet, and in particular, institutional cultures, provide the perfect milieus for highlighting and visualizing this erasure of the human/nonhuman boundary.

The use of humor is crucial, too, because often our engagement with the nonhuman is characterized by either negative emotions (fear, annoyance, repulsion), or a kind of indifferent arrogance. The project’s sarcasm and, by extension, the book’s sarcasm, is meant to subject the reader to a tone wherein the nonhuman, the material, and the discursive are able to take on an autonomous life of their own­­autonomous from human beings that is, or at least from our intentions, but not independent of each other. If the book does anything, it attempts to create a much more weirdly inclusive ecology.

Check out the project here.