Jessica Kuhn features Together+ in HOWdesign.com article Design for Change: 13 Ideas that Matter:

In the spirit of “Ubuntu,” the together+ campaign seeks to unify communities. “Ubuntu” is an ideology rooted in the South African culture that roughly translates to “I am because we are.” The project seeks to address xenophobia in South Africa’s largest urban center, Johannesburg, and has the potential to be scaled for other South African communities. There are four projects contained within the campaign that will be distributed to schools in January 2013. The following organizations are collaborating to bring this project to life: The Kgosi Neighbourhood Foundation, Pellegrino Collaborative and the University of Notre Dame design program.

What was your biggest challenge when bringing this project to life?
The biggest challenge for together+ was cross-cultural communication. The project developed at the request of the Kgosi Neighborhood Foundation, a nonprofit in Johannesburg, South Africa. The project was executed by a team of American designers. Communicating across not only American/South African cultures, but among refugee populations as well was quite a challenge. To overcome this, we relied heavily on feedback given by audiences in South Africa. User-testing and research conducted on the ground was essential to inform the project’s solutions. Furthermore, designing print and environmental materials for a challenged socio-economic and cultural environment required solutions that carefully considered form and function for both longevity and ease of use.

How do you hope this project impacts the lives of others?
Research revealed that South African children have very negative perceptions of foreigners, but when exposed to other perspectives were open and able to accept them.

Sedlack Design Associates chose to target young people because their worldview is impermanent. Currently, the South African curriculum contains very little about the culture and social challenges in other African countries. Instead, a child’s view of other African people is shaped by popular sentiment. By integrating educational materials into an already developed network of schools, together+ can reach a large number of students and change their perceptions. In addition to educating young South Africans, together+ will provide refugee populations with information about their rights within South Africa so they have the knowledge necessary to advocate for themselves. 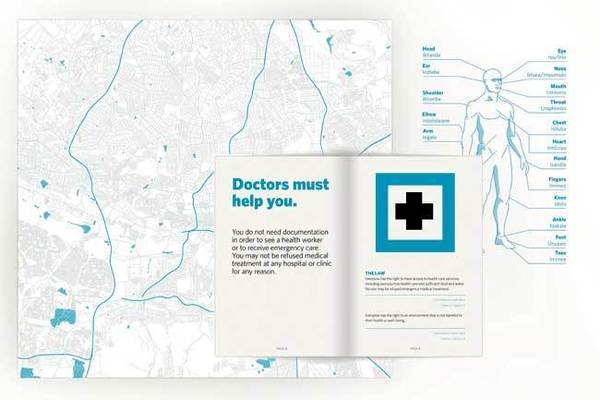